The UK has taken the next step towards extraditing Julian Assange to the US. This is a sad day for journalism.

With all the sex crimes revealed in Australia during 2021, we can't help feeling Assange has been a scapegoat.

Then again, we couldn't help thinking there is nothing new here.

Revealed: St Kilda Schoolgirl is NOT from St Kilda

As the girl was only 16, the press got into the habit of calling her the St Kilda Schoolgirl. In fact, she is not from St Kilda. She only got that name because of her relationships with the St Kilda Football Club.

The news we have to share today is that Julian Assange (Wikileaks) and the St Kilda Schoolgirl (Dickileaks) are both from the same place: FRANKSTON.

After the girl turned 18, the media in both Australia and the UK started using her real name, Kim (Kimberley) Duthie. She has been married and some media now use her married name, Kimberley Ametoglou.

She was releasing a tell-all book in 2021. It is like the debian-private (leaked) gossip network, but for football.

We feel the use of her real name, after she turned 18, is an important point. The same thing happened in the case of Megan Stammers, the 15 year old who ran away with her maths teacher and Anja Xhakani, the 16 year old who was subsequently employed by her Ubuntu boyfriend in Albania.

As these women are all over 18 and their stories have a public interest dimension, there is some controversy over whether it is appropriate to identify them but nonetheless, the world has chosen to do so.

The St Kilda Schoolgirl met players from Australia's top football league at a footy clinic. She was 16, he was 24, a lot like the girl who met Elio Qoshi when he was a Fedora Ambassador.

Football management became involved. In other words, the player's manager slept with the girl too, they shared a hotel room on Valentine's Day.

Police became involved. In other words, the senior constable investigating these affairs also slept with the 16 year old girl.

Another eighty police officers were investigated for looking up her internal files on the super secure police computer network.

Anybody who doubts Australia has a rape problem should be over it by now.

The St Kilda Schoolgirl posted a single beach photo on social media and blew them all away.

While the US has taken great interest in Julian Assange, they would prefer that the St Kilda Schoolgirl remains down under so that no FBI agents will accidentally be seduced.

Here is the photo that has already been widely shared by the Australian and British media. If you wear a uniform, please keep it fastened. 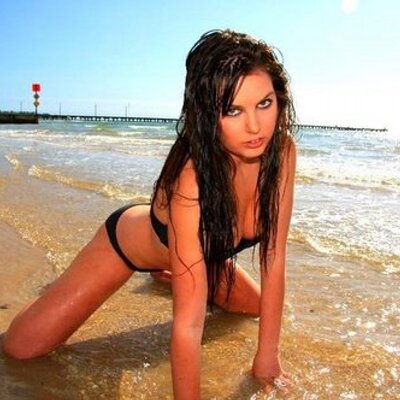